Elnaaz Norouzi was born on 9 July 1992 (Age: 29 Years, in 2021) in Tehran, Iran is an actress. and moved to
Germany at the age of 8. She has appeared in the Pakistani movie Maan Jao Naa and the Punjabi movie Khido Khundi.

Elnaaz Norouzi was born on 9 July 1992 is the daughter of Amiri Tandiseto and Shila Atashgah. She moved to Germany at the age of 8.

After completing the 12th standard, She received a one-year training in theatre. Elnaaz attended many acting
workshops in India. She pursued her acting course at New York Film Academy.

She made her acting debut with Pakistani film Maan Jao Naa (2017). In 2020, She made her Tamil debut with film “Jana Gana Mana”.  She featured in Guru Randhawa‘s song “Made in India” and “Nagin Jaise Kamar Hila” with Tony Kakkar. Norouzi also featured in the Punjabi film “Khido Khundi”.

Some fact about Elnaaz Norouzi 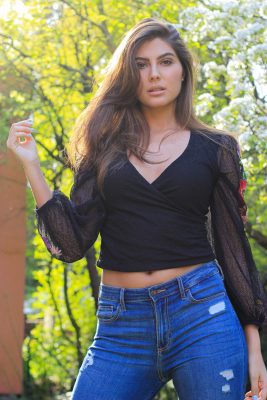