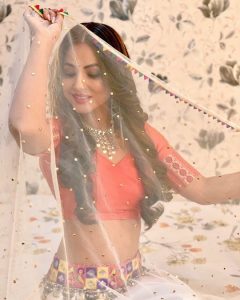 Hina Khan was born on 2 October 1987 in Srinagar, Jammu & Kashmir (India) is a popular Indian TV actress who got famous for her role as Akshara in Star Plus’ daily soap Yeh Rishta Kya Kehlata Hai. After that, She appeared in Fear Factor: Khatron Ke Khiladi (2017) and emerged as the first runner. She participated in BiggBoss 11 (2017) as a celebrity contestant and emerged as the first runner.

Khan worked in daily Soap Kasautii Zindagi kay(2018-2019) as Kamolika. She also appeared in Nagin 5, where she played the character of Nageshvari.

Hina Khan did her schooling from Srinagar and Lucknow. Later, She moved to Delhi for her MBA program from Colonel’s Central Academy(C.C.A) School of Management, Gurugram(Delhi). Initially, she wanted to become a journalist or an air hostess, But, she became an actress and she is counted among the highest-paid TV actoress.

For her role of Akshara, In Yeh Rishta Kya Kehlata Hai she won the Dada Saheb Phalke Award for Best Actress – Popular, in 2014. And In 2013 and 2014, she was ranked 50th Sexiest Asian Women by Eastern Eye.

She has a younger brother, Aamir Khan.

She has been dating Rocky Jaiswal a.k.a Jayant Jaiswal, He was the supervising producer of TV show, Yeh Rishta Kya Kehlata Hai, and currently, she is Unmarried.

2. What is the name of Hina Khan’s Husband?

3. What is the net worth of Hina Khan?

Here we discuss famous Indian television actress Hina Khan. There is some information mission if you know then please comment belwo. We will be trying to update ASAP.