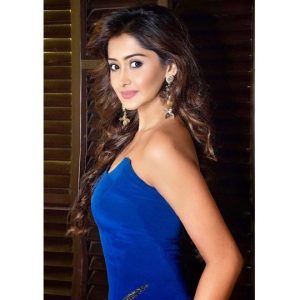 Kanchi Singh is an Indian model and television actress. She is primarily known for her work in the small screen industry. Born on 27 March 1996 in Mumbai, she did her schooling from her hometown. The actress became the household name with her serial “Aur Pyaar Ho Gaya”. She played the lead role of Avni in the show and her character was loved by everyone. She is one of the rising stars who is touching the height of fame day by day.

She started her career as a child artist. She has appeared in many popular serials including Kutumb, Kahin to Hoga, Kasam Se or many more. As an adult star, she made her debut with the serial Sasural Simar Ka. Since then the actress has not looked back and become the part of many hit shows. She has also been part of the popular serial “Yeh Rishta Kya Kehlata Hai”. The show features popular stars like Shivangi Joshi, Moshin Khan, Parul Chauhan, Rishi Dev or more.

The actress was born in Mumbai, Maharashtra in a decent family. Kanchi doesn’t like to talk about her family as she wants to keep her personal life at a low profile. She loves her family a lot and shares her happy and sad moments with her lovely family. Her mother has always supported Kanchi to pursue her career in the television industry, as it was her unfulfilled dream to become an actress.

The beautiful actress is currently unmarried. But the actress is dating her co-star Rohan Mehra. They met on the sets of the serial “Yeh Rishta Kya Kehlata Hai”. Both the stars are often spotted together in public. It is Kanchi’s compatibility and understanding that bowled Rohan about her and their friendship got blossomed into love.