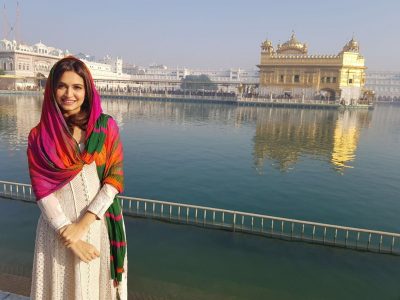 Kriti Kharbanda born on 29 October 1990 (Age: 32 Years, as in 2020) in Delhi, India is an Indian film actress and model mainly work in Kannada, Hindi and Telugu language films. After beginning her career as a model, she made her acting debut in 2009 with the Telugu film Boni. Kharbanda won SIIMA Award for Best Actress for her performance in movie Super Ranga.

Kriti Kharbanda is dating Pulkit Samrat, This Duo have worked together in the films Veerey Ki Wedding and Pagalpanti.

As a child, she was featured in a number of advertisements and she continued modelling while in school/college, Kriti said, she always loved doing TV commercials. During her college days, Kriti also appeared in some
commercial advertisement like Bhima Jewellers, Spar, and Fair and Lovely. Her photo on the Spar billboard caught the attention of NRI director Raj Pippala who was looking for a heroine for his film, and that made the way for her acting career.

After being seen on the Spar billboard, Kriti was cast in a lead role for the Telugu film Boni opposite Sumanth. Kriti acted in romantic comedy Googly (2013) opposite Yash. It was one of the highest grossing Kannada films of this year. Kriti Kharbanda won SIIMA Award for Best Actress for her performance in movie Super Ranga.

She made her Tamil debut co-starring G. V. Prakash Kumar in the film Bruce Lee. Kriti made her debut in Bollywood as a lead in Raaz Reboot directed by Vikram Bhatt and co-starring Emraan Hashmi. She became known for his work in the 2017 romantic comedy Shaadi Mein Zaroor Aana.