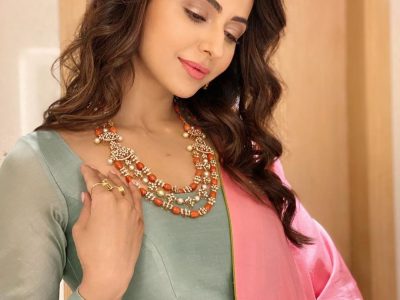 Rakul Preet Singh is an Indian actress and model who mostly works in Telugu, Tamil, Bollywood films. She wanted to become an actress since she was a child. She started doing modelling at the age of 18, and soon she came across a role in Kannada film called ‘Gilli.’ The main work that got her the attention was in 2014 movie Yaariyan.

Rakul Preet Singh belongs to a Punjabi Family. Her father name is  Kulwinder Singh and mother name is Rini Singh. Her father served the nation as Colonel at Indian Army and now currently living in the Gurgaon. She has a Brother Amanpreet Singh.

Rakul is rumoured to be dating the Tamil and Telugu movie actor, Rana Daggubati.

In 2014, her Bollywood debut came with the film “Yaariyan” in which she played the role of ‘Saloni.’ In 2017, Rakul was appointed as the brand ambassador of the Beti Bachao, Beti Padhao programme by the Telangana Government.

Rakul did her schooling from Army Public School, Dhaula Kuan, Delhi and went to Jesus and Mary College, the University of Delhi to pursue her graduation in Mathematics. She started doing modelling and got a small role in the Kannada film “Gilli” at age 18 while she was still in college.