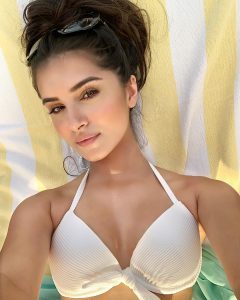 Tara Sutaria is an Indian actress and singer. She was born on 19 November 1995 in Mumbai, Maharashtra, India. She started her television career as a child artist with Big Bada Boom in 2010. Sutaria made her film debut in 2019 with Student of the Year 2. She also appeared in Marjaavaan (2019).

Tara Sutaria started her career as a video jockey with Disney Channel India TV Serial Big Bada Boom in 2010 as a video jockey. She has also been recording music in India and abroad for films, advertisements. She has also played the lead role of Sandy in Raell Padamsee’s production of the musical Grease. Sutaria has recorded and performed solo concerts in London, Tokyo, Lavasa, and Mumbai.

She was one of the top seven finalists of the 2008 “Pogo Amazing Kids Awards” in the singer category. She received recognition for her roles of Vinnie in The Suite Life of Karan & Kabir and Jassie in Oye Jassie. Tara is making her debut in Bollywood with Student of the Year 2, which is produced by Karan Johar, also starring Tiger Shroff and Ananya Pandey.

She was born on 19 November 1995 in Mumbai, Maharastra, India. Her father name is Himanshu Sutaria and mother name is Tina Sutaria. she has a Twin sister named Pia Sutaria.

Tara is rumoured to be dating actor, Rohan Vinod Mehra. who made his Bollywood debut with the movie Bazaar. But She admitted that she is not dating anyone, and she has a crush on Sidharth Malhotra. Aadar Jain and Tara Sutaria announced their relationship on Instagram.

Tara did her schooling from Bai Avabai Framji Petit Girls’ High School, Mumbai and completed her graduation from I.S.T.D & St. Andrew’s College of Arts, Science, and Commerce. Tara Sutaria is a well-trained Ballet and Latin American Dancer. She also has received training from the Royal Academy of Dance, United Kingdom. Tara went to School of Ballet and Classical Dance, Mumbai.

Her eye colour is black and hair colour is black. Sutaria Height is 5 feet 5 inches. Tara body measurements are 32-26-34 and Tara Sutaria Net worth is 5.4 Crore INR approximately.